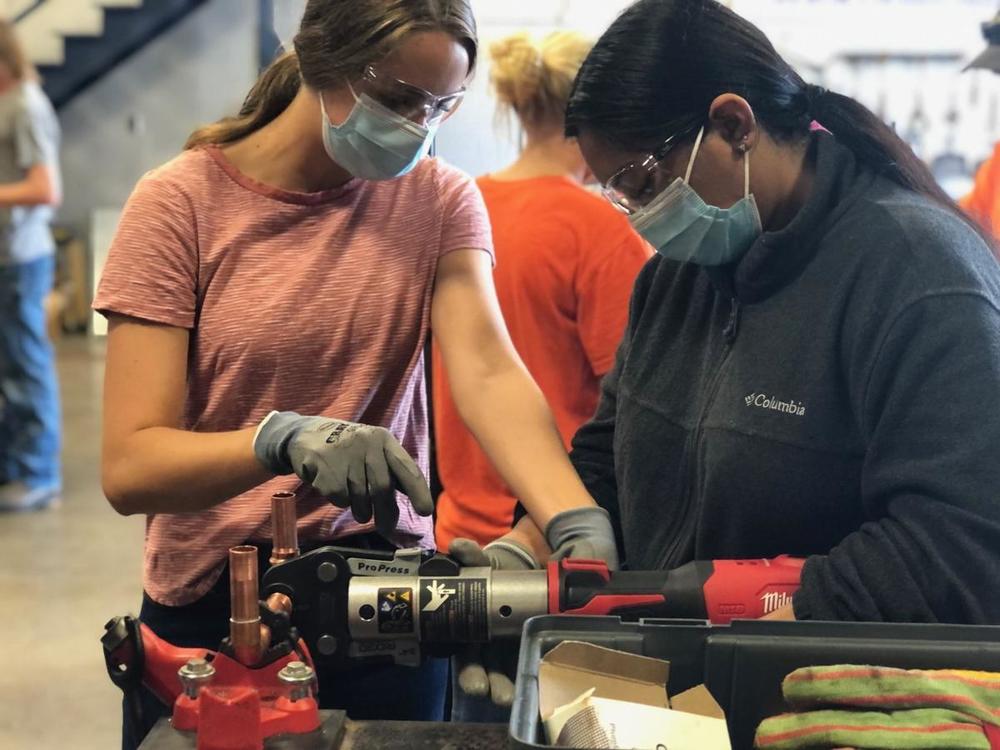 Parkland program gives high-schoolers a taste of the trades

SAVOY — Minutes after watching 20-year professional Justin McMullen solder, braise and clamp a pipe joint with a ProPress, 14 local high-schoolers were donning protective gloves and goggles, grabbing a blowtorch and trying it out for themselves.

First up: the solder.

“Half-moon, half-moon, keep the heat on,” McMullen told Central High School student Anneliese Schideman, referring to the shape she should be creating with the molten metal. A minute later, he was showing her finished joint to the class.

“My first one was kind of bad, but it got better. It’s stuck together, which is good,” Schideman said. “It’s very hands-on, and I enjoy doing it that way. I’d rather do it with my hands than in the classroom.”

Welcome to one of the first demonstration days for Parkland College’s construction trades program, a yearlong primer showing the tools and tricks of common trades for interested high school students.

The construction path is the newest of the Early College Career Academy’s nine dual-credit programs, which include classes in automotive services, computer networking and programming, and emergency medical services, among others.

Students from 14 local districts spend their first couple hours of the day, from about 7:30 a.m. to 9:30 a.m., in a mix of specialized curricula and hands-on work with industry professionals.

After a few days of classroom instruction, the newbies made a stop late last month at UA Local 149 in Savoy, the local officers of the plumbers and pipe fitters union, putting new knowledge to the test under professional supervision.

Next up this week: a stop at UI Facilities and Services.

Some of these kids are dead-set on a career in the trades: Paxton-Buckley-Loda junior Keaton Garren wants to be an electrician; St. Joseph-Ogden senior Chase Chapman wants to be a plumber after doing work on PVC pipes in pools.

Others are using this as a litmus test.

“Coming into it, I hadn’t had any experience at all,” said Central senior Emma Wurl. “My grandpa and uncle are both electricians, so I wanted to try that, I felt like trades would be a good thing for me to go into and try.”

Whatever the juniors and seniors decide to do, it’s a win in the eyes of the academy’s instructors. Students can leverage the OSHA 30 certificate they earn at the end of the year into professional experience or use the college credit to get an associate degree or beyond.

“It’s giving them that other outlet, because if you talk to a guidance counselor, all they tell you is you have to go to college,” McMullen said. “This gives hands-on knowledge of what you can do otherwise.”

The construction program’s method of teaching — which includes two days a week of off-campus, professional instruction — offers a unique feedback process that none of the supervisors had when they first entered the business.

“Some of this is intimidating,” said lead Dustin Stuart, a construction worker, remodeler and part-time Parkland instructor in construction management. “I was talking with a student and he was next in line to hold the 1,000-degree blowtorch, and I was like ‘Hey, man, you scared? He goes, ‘Yeah.’ And I was like, ‘Dude, you’re going to do this, and you’re going to feel so good when you’re done.’”

Stuart’s been teaching classes on the trades at Parkland since 2018. He said he loves the “ah ha” moment on students faces when they get the hang of a new technique.

This is his first year teaching high-schoolers, though, and he’s noticing a different level of malleability and open-mindedness.

“What I’m getting is really good engagement; eye contact, good responses to my questions,” Stuart said.

“College kids have that, too, but with these kids, I’m getting a spark that I’m not used to through a whole class period.”

It’s a far cry from Stuart’s start in the industry. With little YouTube tutorials or professional connections to speak of, he used to check-out manuals from the bookstore to learn remodeling techniques.

The program costs $2,000 per student, which about half of the schools completely cover themselves, said Nick Elder, supervisor of the Early College Career Academy. Four days in, the students already had hands-on time learning key maneuvers in the industry, as well as the business cards of workers with decades of experience.

Stuart twists a popular proverb to sum up the humbling process of learning a trade.

“It’s not enough to just teach a person how to fish and tell them to go fish,” Stuart said. “We’ve got to enable them and nurture them and put them in a position where they’re able to go fish.”

That means a safe environment with both physical protection and a judgment-free demeanor, where mistakes are just steps in the learning process.

“All of these students could go home and do some plumbing work right now,” Stuart said. “I’m not going to say it’s going to be very good, but they can take this home right now. Even if these students over the next 16 weeks decide they don’t want to do this at all, it’s still a victory in my eyes, because now they know.”

While preparing his pipe for a solder, Garren summed up his experience succinctly.